I want to discuss your low back and some common yoga movements that could be contributing to discomfort and injury.

The spine has three natural curves, and thanks to these curves the spine is strong and supple. When the curves are compromised (either too much curve or too little curve), the result is often pain. The natural shape of the low back is a lordotic curve, meaning a concave curve that moves into the body. It’s initiated from the top of the sacrum (the long flat bone at the base of your spine) which, when in neutral alignment, should tip into the body, creating an even rate of curve among the lowest five vertebrae.

A flattened lumbar curve is a common pattern, and can be exacerbated by some movements while exercising. When the low back curve is lost, the discs of the spine are at risk of first bulging, and even over time herniation. The most commonly herniated discs are the two between L4-L5, and L5-S1; this is the lowest part of the lower back, just above the sacrum.

I have often observed in yogis this pattern of a flattened low back, even among individuals who sense they have an overly curvy low back (sometimes self diagnosed as ‘sway back.’ A prevalent pattern I see is a very mobile upper low back (L1, L2, L3), and a more flattened and stuck lower low back (L4, L5, S1).

Why does the curve disappear? A few reasons:

On that last note, one of the most perilous instructions that I have heard countless times in yoga classes is to ‘roll up to stand from a forward fold one vertebrae at a time.’ I don’t recommend this transition for most students, and explain why in this video, as well as offering a safer alternative.

I also recommend coming down from bridge pose with the natural curve preserved, instead of rolling down one vertebrae at a time. It’s not that the flexion of the vertebrae in itself is necessarily dangerous, but it nearly always results in the student maintaining that flattened curve, and failing to return to a neutral pelvis and low back. Check it out:

Forward flexion and backward extension of all the vertebrae are important for longterm health of the spine. So it’s not that all forward flexion is dangerous, or that the low spine should never round. It can, and it must! However, patterns of flattened lumbar curves coupled with the added weight of rolling the spine to stand are a risk worth avoiding. It’s the same reason we’re told to bend our knees when picking up a heavy box: adding weight to the spine when it’s not safely curved can be dangerous.

Hope this helps. To the health of your spine, and a safe yoga practice over the long haul! 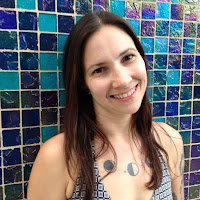 Justicia DeClue (E-RYT 500) has been teaching since 2005 and is the owner and director of Maha Yoga in Philadelphia. She is most sought after for her detailed alignment instruction and open-hearted teaching style. She really loves Instagram, and can also be found on Facebook.

All sales are final.

Find us here too!